It's been almost a year and I'm just writing to let any of you who might be subscribed (and still have the same e-mail address) know that I have a new blog. It's called "How Many Homeschoolers Does it Take to Make a Movie?" It's not about me, though. I'm writing it for a friend of mine, a fellow unschooling mom, who is making a film. The story the film tells is wonderful, but I'm not going to write about that. What really interests me is how my friend came to be making this film in the first place. Because, really, how in the heck does a homeschooling mom with two kids, a husband, pets, a part-time job, and a ton of responsibilities in our homeschool group manage to find the time and energy to write a script--let alone find a way to get it produced!? Well, she did it--she even managed to make it a family project, of sorts. And the story is really inspiring. So I'm blogging about it. I hope you'll take the time to check it out.

And I hope you're all doing well!

Hi there. Long time no type. I'm just writing to let you know that I've deleted the other blog that I started (all five posts) and since I don't have much to say about unschooling anymore--it's just part of living life nowadays--I probably won't be posting here either. If you're new to unschooling you might want to go back to the beginning of this blog and read it in order. It'll give you a good sense of what to expect if you're coming from a pretty schoolish mindset. It'll also give you some good ideas on what not to do. And hopefully you'll find a few golden nuggets of wisdom thrown in, too. Unfortunately, a lot of wisdom was deleted when there was a glitch with my comments and all the comments from my wonderful unschooling mentors (JJ I'm looking at you!) vanished forever. Oh, well. C'est la vie.

Anyway, thanks for stopping by. Enjoy the journey!
Posted by Colleen Paeff at 4:40 PM 3 comments:

The first post of the year is up at my new blog! It's still a work in progress over there, but it'll be better soon, I swear!
Posted by Colleen Paeff at 8:11 PM 1 comment:

The New Unschooler Is Moving On

I've decided to start posting at my other blog--the one I started a year ago and promptly forgot. It's called "Simple. Frugal. Fun." and I think posting there rather than here at The New Unschooler will help me keep focused on my goal of getting my act together and getting the house in order this year.

I feel really good about what I've done so far, by the way! The house is a disaster, but I'm really enjoying all the work I've been doing and I can imagine a time in the not so distant future when I'll know exactly what lies within these four walls and where to find it. Plus, I've realized that my leisure time is much more enjoyable when I feel I've accomplished something toward my goals first. I haven't posted anything over there yet, but when I do (probably later today or tomorrow morning) I'll be sure to let you know and provide a link.

I hope you'll stick with me at my new home. After all, at day 1,214 I can hardly call myself a "new" unschooler any longer! I'm sure I'll still have something to say about unschooling every now and then, but for the most part it's just become such a natural part of our lives that I rarely even think about it let alone feel like writing something about it. If I do have something to say about unschooling I'll post it on the new blog where my focus will be on getting myself and my house in order so my family can take full advantage of the freedom unschooling has given us.

So I'll see you at Simple. Frugal. Fun. 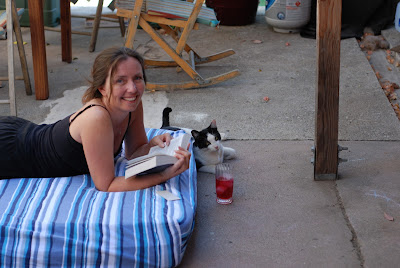 I'm not going to write much today because I've spent most of the day sorting, organizing, shredding, etc and I'm ready to put all responsibility aside, change into my PJs (yes, before 5pm) and read my new book. In the meantime, head over to Hyperbole and a Half and read This is Why I'll Never be an Adult. It pretty much sums up my usual approach to getting things done. And it's hilarious.
Posted by Colleen Paeff at 4:59 PM 3 comments:

Email ThisBlogThis!Share to TwitterShare to FacebookShare to Pinterest
Labels: organizing

What a full, productive day! I started off with my usual Monday morning appointment at the home of my 95-year-old friend, Sol, where I spent a couple hours helping him balance his check book, write a New Year's letter, and get to the bank. Next, I came home and because I've been working so hard at getting the house organized (as evidenced by the complete mess in nearly every room) I was able to watch a movie ("Women on the Verge of a Nervous Breakdown") in the middle of the day, absolutely free of guilt. Next I tackled one of the fullest, most intimidating boxes in my office. I had even decided to forgo my "Awesome 80s Dance Party" class (which I love!) in favor of going through the boxes. But, guess what!? I finished the box at 6 and class starts at 6:30. So I made it! When class was over I crawled home, checked my e-mail, and got a call from Warren saying he was almost home from work--at 8:00! (Yes, that's cause for celebration in the movie business.) And even though Warren had just said yesterday that we shouldn't spend money eating out, he agreed that we should walk down to the dosa truck (which conveniently parks a block from our house every Monday night) to get some dinner! So, we bought way too much food (including dessert) and stopped in at the wine shop to get some of the beers off of our list of 50 Beers to Try Right Now. Then we came home, ate our dosas, drank our beer, and watched an episode of Doc Martin. It was a near perfect day. Oh, and Jerry is having a sleep over at a friend's house which is really great because he hasn't seen much of this friend lately, so I know he's got to be really happy about it. There you have it. A round up of my first Monday of 2011. I hope to have many more just like it!
Posted by Colleen Paeff at 10:29 PM 7 comments:

Email ThisBlogThis!Share to TwitterShare to FacebookShare to Pinterest
Labels: a day in the life, organizing

I was going to post some photos of my new craft room/office (formerly Jerry's play room), but we still haven't fixed the PC, which means I still don't have sole use of my laptop, and I can't put photos on the computer I'm using. So, no luck. It's okay, though. You can use your imagination. Here we go:

Imagine a play room so full you rarely, if ever, see the floor. Imagine open bins of toys (nearly all made of small parts, of course) on book shelves, in front of book shelves, on the sofa. Imagine a cluttered desk (at least it looks like a desk--you can't really be sure) and then imagine adding lots of boxes of fabric and craft supplies and electronics equipment and unfinished projects (they're coming from another room) to the mix. That's the before picture.

Have a cup of tea now while a couple weeks pass and I have two appointments with Abbey the Organizer, in addition to doing a lot of organizing and sorting and throwing out and putting things in other rooms (or the garage--it'll come back to haunt me, I know) on my own.

Welcome back! Now imagine an empty desk. An orderly bookcase. A sofa free of anything but a couple pillows (purchased on my recent trip to Crete!). A new (to this room) cabinet of closed shelves that houses sewing supplies in meticulously organized and neatly labeled bins. A lovely wall unit (also new to this room) with neatly organized shelves, drawers of office supplies, a closed cabinet of craft supplies, beautifully framed photos of my adorable nieces and nephews, and a labeled (if slightly disorganized) box of electronics equipment. Now let your eyes wander across the clutter-free, newly swept floor to the opposite wall where six clear plastic bins are full of (neatly folded and organized!) fabric and half-finished (but separated into Ziploc baggies!) projects--all labeled and stacked beneath the window. A one-legged Iron Giant figure laying atop the bookcase is the only item in the entire room that seems out of place. Still, the room looks great. Savor it. It's not going to last.

Now, go downstairs and peek around the corner of the former "wreck" room. It's still a wreck, but it's officially becoming Warren's office and music room now. It used to be our shared office. And it was the place we stored--well, just about everything that wouldn't fit in the garage. So all my writing paraphernalia, all the family memorabilia, all the boxes of stuff from when Jerry still called himself Batman (including his little black cape!), the magazines, and the other non-Warren, non-music-related items will be leaving this room to go to their new home--my craft room/office.

OK. Now have another cup of tea because a week needs to pass in which Warren and I organize and categorize almost everything in the "wreck" room.

Welcome back once again! Now, take a deep, calming breath before stepping into the craft room/office. The wall unit is still there. It's still neatly organized (though there are a couple stacks of papers that weren't there before). The bookcase and the sewing cabinet look the same-except the Iron Giant on the bookcase has both his legs now. There's a different (prettier) desk (also new to the room!) and it's still blissfully free of clutter. But, now look at the floor. Look harder, smart ass! It's there. You just can't see it because of all the friggin' boxes full of the crap we brought up from the "wreck" room.

So, there you have it. The before and after and after of the craft room/office. The first after was really nice. The second one? Not so much.

Still, I plan on having it all categorized in neat little boxes by the time Abbey comes back on the 11th. Looks like I'd better get busy!
Posted by Colleen Paeff at 10:28 PM 5 comments:

What the heck is unschooling? Visit these sites for answers: 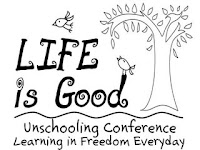